Book Review: My Fight / Your Fight by Ronda Rousey 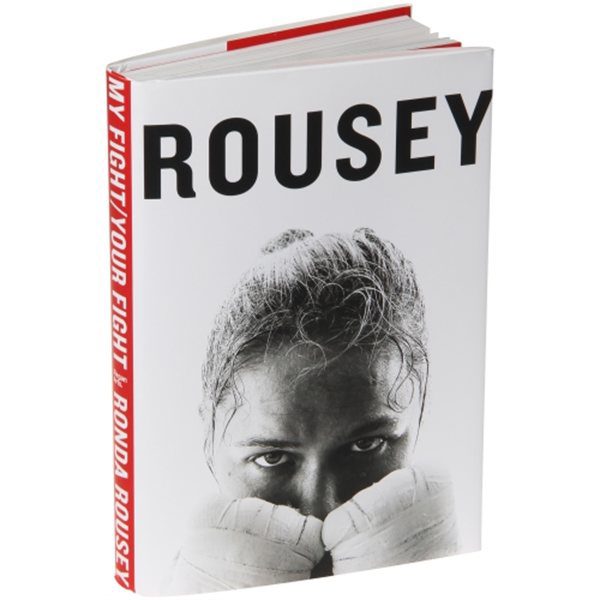 In a Gist: This is a book for your inner warrior. For those who feel like that they have something to fight for, Ronda Rousey, an Ultimate Fighting Championship winner (and the first woman who ever participated in that league), has written a motivational guide book for that relentless fighter spirit we all just might have inside of us.

Read This Book: If you need some supportive push to break boundaries, self-imposed or otherwise.

How I Came Across this Book:

I love reading magazines, and one of my favourite magazines is ELLE. It’s on the Books pages of ELLE US magazine that I came across the recommendation for this book. It was on a short article on books that tells the story of strong women, basically my favourite book genre ever. So I looked it up on Google Playbook and decided to read the sample. I couldn’t get the sample out of my mind, so after a while, I decided to buy the whole book, too.

So What Is This Book About?

Like the title suggests, the book tells the struggles of Ronda Rousey, and how we can all learn some lessons from her fight to apply to our own fight.

Ronda is now quite well-known for being a mixed martial art (MMA) athlete, a professional wrestler with the WWE, and one of the first women who participated in the Ultimate Fighting Championship in the United States. But long before all that success, she was a young woman hell-bent on being the best judoka in the world from her country, inspired by her mother who was also an athlete and one of her first mentors. That proved to take longer and so much more energy and sacrifices than she had ever thought it would. But Ronda is nothing if not a fighter.

She took us on a journey from being trained at all the different clubs and trainers, having to go through all kinds of championships and the Olympic, having to make sure that she weigh properly all the times during fighting times, to being on the fight itself and having to be so focused and controlled, and having to weather all the personal distractions, including all the crappy boyfriends she got obsessed with and bad personal relationships stages that she went through with everyone from her mother to her trainer.

During each of those moments, she wrote beautifully, with pronounced and moving reflections on every page. It was way more poetic and deep than I could ever hope or expected from a motivational book by a female athlete. The book gives me an almost full view of Ronda’s soul as a woman: deeply feeling and often insecure, obsessively ambitious, committed and passionate about being the best in what she does, yet always so vulnerable. It was a total privilege to read this woman champion’s story, and an absolute thrill to learn how to fight from a woman who fought again and again to come out a winner in her own version. 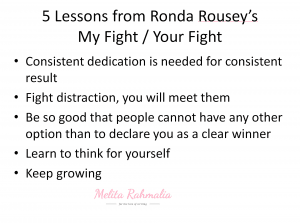 My Favorite Lines from the Book (there are so many, btw!)

Have you ever felt so happy yet so empty?